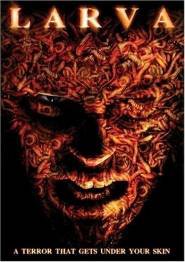 Partial synopsis from the SciFi.com website: Host, Mo., is a quiet ranching community where everyone knows everyone else, and almost everybody earns their living from a local meat-products packager, Host Tender Meats. New to town is veterinarian Eli Rudkus, who makes Host his home after his predecessor retires, leaving a professional vacancy that Eli is happy to fill. However, when Eli is called to the ranch of Jacob Long, a local cattleman, the young veterinarian's seemingly routine house call exposes a dangerous secret about Host Tender Meats that could annihilate this small town.

The label "A Sci-Fi Pictures Original Movie" doesn't make me eager to sample a film. Prior to Larva, the last Sci-Fi horror "movie" that I trudged through was the abysmal Webs from 2003. The effects were amateurish, the acting horrid, and the story was ludicrous. However, that was then and this is now, and the Sci-Fi Channel is responsible for the very impressive "Battlestar Galatica" series. As a result, I decided to give another of their original films a chance. 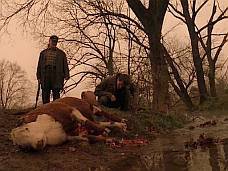 The movie starts off in a Missouri field with four teenagers going cow tipping. The cow in question is already dead on its feet, obviously the victim of the title beasties. (Ah, the irony!) However, the scene ends flat with the teens running off prior to the larva sluggishly (no pun intended) breaking through the animal's hide as the credits begin.

The next morning, a farmer (William Forsythe, who I'll always remember from Raising Arizona) discovers the damage, and calls in the new town veterinarian, Dr. Eli Ruckus (Vincent Ventresca of TV's "The Invisible Man" and the recent indie Dead and Breakfast). The new vet takes a sample of the larva from a living cow and begins his investigation into its parasitic nature. Back at his office, he conveniently cuts his finger on a broken beaker and one of the little critters promptly begins sucking up the blood, growing visibly larger. Understandably concerned, the doc ships it off to the Department of Agriculture biolab. 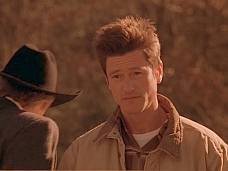 We next move to a big picnic/barbecue sponsored by Host Tender Meats. (Parasites need hosts to breed. Get it? Not very subtle.) In addition to the two male leads and the "evil" capitalist owner of Host Tender Meats, Rachel Hunter (TV's "The Real Gilligan's Island") is introduced as an attorney for the meat company. She is tasked with the job of suppressing the ramblings of Dr. Eli, but in reality serves little purpose beyond being the token female hottie. Needless to say, she later joins the cause against the parasitic outbreak.

Conveniently, the new doc is a vegetarian veterinarian (say that five times fast), and, as a result, is not subjected to the infected hamburgers and steaks served at the soiree. You see, Host Tender Meats is supplying the feed for the town's cattle and the genetically-engineered feed is the cause of the parasitic infection. However, this plot point is largely overlooked because apparently none of the party goers get infected. The one poor schmuck that does gets infected by falling into a river and is promptly hospitalized.

One thing that has become extremely clichéd in horror movies is when the movie opens with the new family or teacher or doctor or whatever moving into the community. The outsider is often regarded with suspicion or distrust. However, it works in Larva. At one point, the doc explicitly states, "Sometimes when you introduce a new element, a foreign element, into an existing ecosystem, it can have a variety of unpredictable effects on the various organisms that were already present within that ecosystem." The parasites are wreaking havoc on the populace, and the doc is causing upheaval in the caste system of the town. It's a nice parallel, and one of the only intelligent aspects to the film. 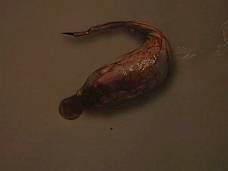 After the parasite bursts through the aforementioned hospitalized host's stomach (reminiscent of Alien, of course) and makes a mess of a hospital room, Farmer Jacob and Doc Eli calmly stalk the creature through the basement of the hospital. Conveniently, Farmer Jacob has brought along two handguns for creature shootin'. Where are the police? Where is the National Guard? We have a winged parasite-creature-thingie that just exploded out of some poor schmuck's stomach and everything is quiet except for two dudes with handguns. It's all pretty silly.

The initial larva stage of the creatures is adequate, but once they develop into the bat-creatures, it's all downhill. The CGI is rather cheap-looking. The bat forms are crude and are largely (and wisely, I might add) kept in darkness. Before long, they are running amok throughout the town and it's up to Doc Eli, Farmer Jacob and Lawyer Rachel to save the day. 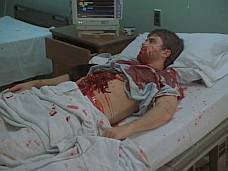 I don't know how much was removed from the flick when it first aired on the Sci-Fi Channel. (It's rated R for the DVD release.) However, there is virtually nothing on display here. The gore is rather tame and there's one very brief booby shot during the horror movie staple scene of two teenagers fooling around at Inspiration Point. The girl takes off her bra, her boyfriend's gut explodes from within, and then moments later she is being chased through a field by a chest-burster. Conveniently--for television airings and continuity lapses--her bra mysteriously pops back on prior to her running through the fields.

Conveniently: that's the running theme throughout the movie. Things happen because people in the town are too stupid to realize the imminent threat. Although the entire populace of the town starts calling the police station to report bat things flying around their farms and bursting out of their cattle, the local sheriff ignores the warnings.

Is the movie all bad? Nope. It held my attention throughout, albeit suppressing chuckles. In fact, the movie could have been a lot better if it had its tongue firmly in cheek. At one point toward the end, I was reminded of another creature feature, Eight Legged Freaks, a goofy yet oddly enjoyable movie simply because it doesn't take itself so seriously. Sadly, Larva wallows in goofy scientific logic (or lack thereof) and idiotic characters played completely straight. It doesn't work. If the Host Tender Meats company had purposely engineered the parasites due to the owner's maniacal agenda, that might have caused the film to rise above the standard direct-to-video (or direct-to-Sci-Fi) dreck.

It's going to be quite a while before I give into the temptation of watching another Sci-Fi Original Movie, that's for sure.